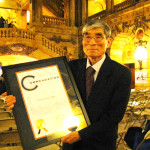 2019  The Community Contribution Award from Research Foundation of Korean Community

2019 A Grant of $50,000 from One Asia Foundation for Creating a Course, “Peace in Asian Countries: From Conflicts to Reconciliation”

2018 Min’s article, “Transnational Cultural Events among Korean Immigrants in the New York New Jersey Area,” published in Sociological Perspectives in 2017, was selected as a co-winner of the Second Best Work Award among all books and articles focusing on overseas Koreans and published in 2017 and 2018, by Association for Studies of Koreans Abroad, Seoul.

2017 Grant ($8,000) for a book project on Statistics on the Korean Community in the U.S. from Overseas Koreans Foundation

2017 Grant ($11,380) from the Academy of Korean Studies for the Conference on the Redress Movement for the Victims of Japanese Military Sexual Slavery

2016 Grant ($10,000) from Joh Foundation for Research for the Research Center for Korean Community

2015 Global Korean Award from the Council of Korean Studies at Michigan State University for contributing to Korean studies and the Korean community in the U.S. with research and data

2013 Fund for 3 Dissertation Scholarships ($9,000) for the Research Center for Korean Community from the Nadri Jewelry, Incorporated.

2013 The New York City Comptroller’s Award on the Occasion of Celebrating the Asian American Heritage Month (May) for “his passion and dedication to education and teaching others; for his commitment to providing the public with resources, facts and information about their communities, for his outstanding sociological research; and for his tremendous contribution the City of New York. One of Five Recipients among Asian Americans

2013 Reception of “Proud Korean’ Award” from the Overseas Korean Journalists’ Association, one of six recipients of the awards and the only one in the Korean community in the U.S.

2013 Grant ($14,000) from Center for Addition and Mental Health, Toronto University for the Conference on “Second-Generation Korean Experiences in the United States and Canada” and Publication of an Edited Book Based on the Presented Papers

2012 Grant ($50,000) from Bogopa Inc. for Operation of the Research Center for Korean Community

2012 The Honorable Mention Award (second place) in the Best Book Award from the Sociology of Religion Section of the American Sociological Association for his book Preserving Ethnicity through Religion in America: Korean Protestants and Indian Hindus across Generations.

2012 Fellowship ($20,000) received from International Center for Korean Studies (ICKS) at Korea University in Korea for the Book Project The Role of New York Korean Immigrants in Globalizing Korean Culture

2011 Fund ($9,000) from the Global Society for Korea and America for 3 Dissertation Scholarships

2011 Honorable Mention (second place) in the Thomas and Znaniecki Book Award competition from the International Migration Section of the American Sociological Association for his book Preserving Ethnicity through Religion in America: Korean Protestants and Indian Hindus across Generations.

2010 Support of $50,000 from Bogopa Inc. for the Research Center for Korean Community

2010 Reception of the 2010 Outstanding Book Award from the Association for the Studies of Koreans Abroad for Preserving Ethnicity through Religion in America: Korean Protestants and Indian Hindus across Generations

2009 Reception of $200,000 Donation from Bogopa Inc. to Establish the Research Center for Korean Community (The Center Established in Fall 2009)

2006-2007 Visiting Scholar Fellowship at Russell Sage Foundation for writing a book on The Effect of Immigrant Entrepreneurship on Ethnic Attachment on Ethnic Solidarity: Chinese, Indian, and Korean Communities in New York (the only Queens College professor to get this fellowship)

2005-2007 National Science Foundation Grant ($101,791), “The Effect of Immigrant Entrepreneurship on Ethnic Attachment and Solidarity: A Comparison of Chinese, Indian, and Korean Immigrants in New York”

2003 Contemporary Authors by Thompson and Gale–

2001-2002 “Religion and Immigrant Incorporation in New York.” The Center for Immigration, Ethnicity and Citizenship, New School for Social Research ($10,000). Subcontract.

2000 Reception of Honorable Mention Award (second place) in the 2000 Gustavus Myers Outstanding Book Awards Competition from The Gustavus Myers Center for the Study of Human Rights and Bigotry for Struggle for Ethnic Identity: Personal Narratives by Asian American Professionals

1998 The Outstanding Book Award by the Section on Asia and Asian America of the American Sociological Association for Caught in the Middle: Korean Merchants in New York and Los Angeles.

1997 The National Book Award in Social Science by the Association for Asian American Studies for Caught in the Middle: Korean Merchants in New York and Los Angeles.

1997 The Community Service-through-Research Award by the Korean-Association of New York.

1991 An Award for the Contribution to Community Research on the Occasion of the Asian & Pacific Islander Heritage Month by the New York City Comptroller.

l986 “Some Positive Functions of Ethnic Business for an Immigrant Community: Korean Immigrants in Los Angeles.” A Research Grant by the National Science Foundation (Principal Investigator) ($78,320).